Minigolf is a sport game played with a ball and a club, which is played on special fields, both indoors and outdoors.

At first glance, it may seem that mini golf is a smaller copy of regular golf, but there are a number of distinctive features that make it a separate sport. Among them are the size and composition of the ball, the tradition of changing balls during the game (and not clubs) and others.

The shape and dimensions of the playground are not regulated. Most often, 18 playgrounds are located on 1 playing field, each of which is numbered and has its own ups and downs and obstacles, which are created using landscape features, stones and various artificial structures.

The game starts on the starting tee circle (diameter 30 cm). The goal of this sport is to get the ball into the hole in the least amount of strokes. There is a huge variety of types of balls, each of them has its own diameter (37-43 mm), weight (22-80 g), stiffness, rebound and surface type (varnished, varnished with fine wrinkles, uncoated). 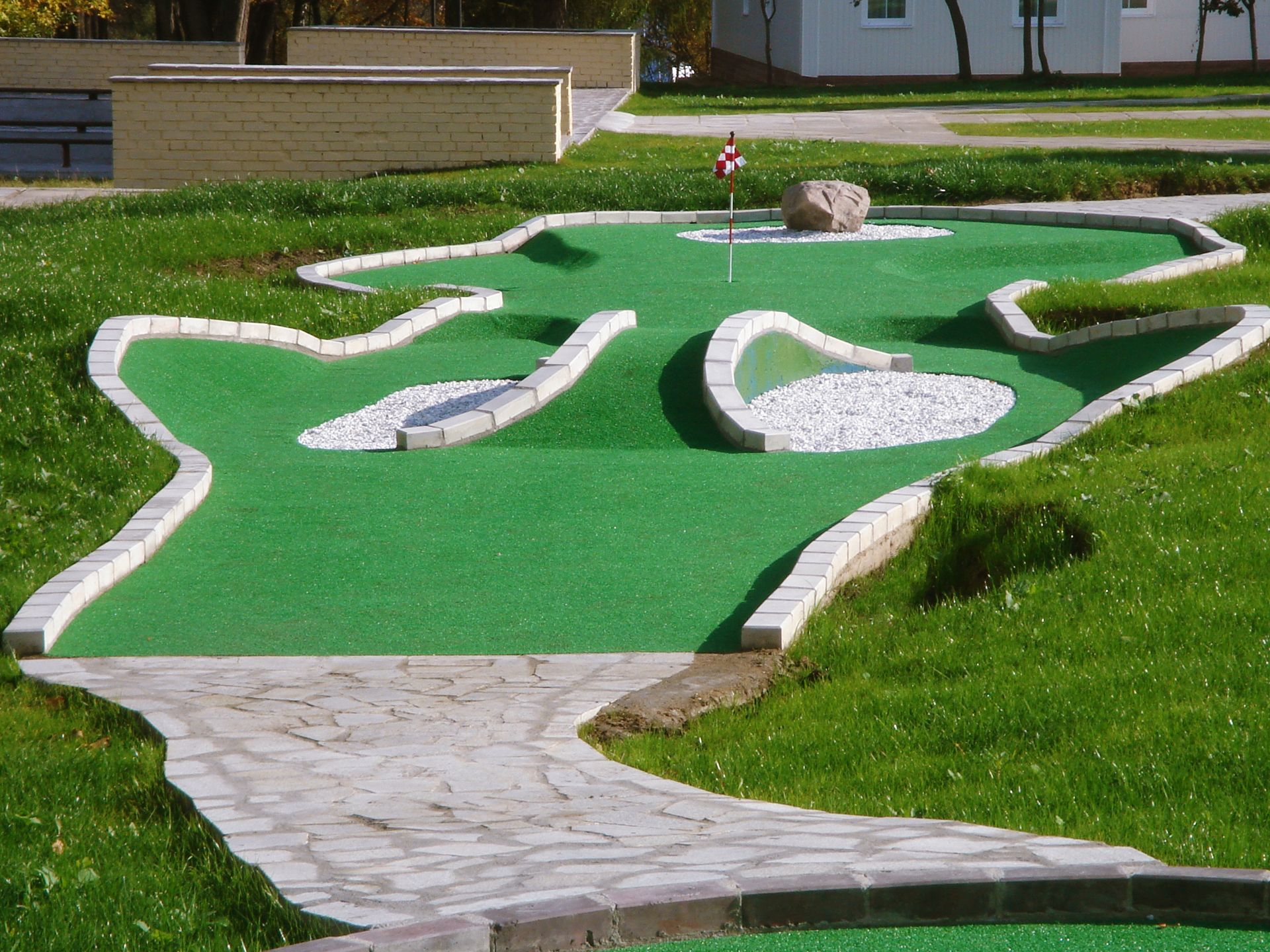 Such a wide range is due to the different characteristics of the sites themselves (there are concrete, felt and others). When playing, a stick with a playing surface of the head up to 40 cm2 is used; special nozzles that increase the accuracy of impact are prohibited. Sometimes all the holes in the field are decorated in a single style (cartoon characters, historical objects, labyrinths, etc.).

Mini golf is perfect for those who like active recreation.

Such a pastime will bring a lot of positive emotions, and will also help improve coordination of movements, the eye and the ability to control your emotional state. Large American and Western European companies often place small mini-golf courses on their territory so that employees can warm up and “let off steam”.

Some screenwriters willingly included episodes where the main characters play mini-golf in their films. For example, “Overboard”, “Eurotrip”, “Big Business” and others.

Minigolf has become an incredibly popular game among people who love sports and outdoor activities, and there are already dedicated lanes for office and minigolf in many executive offices. It is worth noting that minigolf is by no means an ordinary golf in a reduced format. It is a completely separate and completely independent sport. 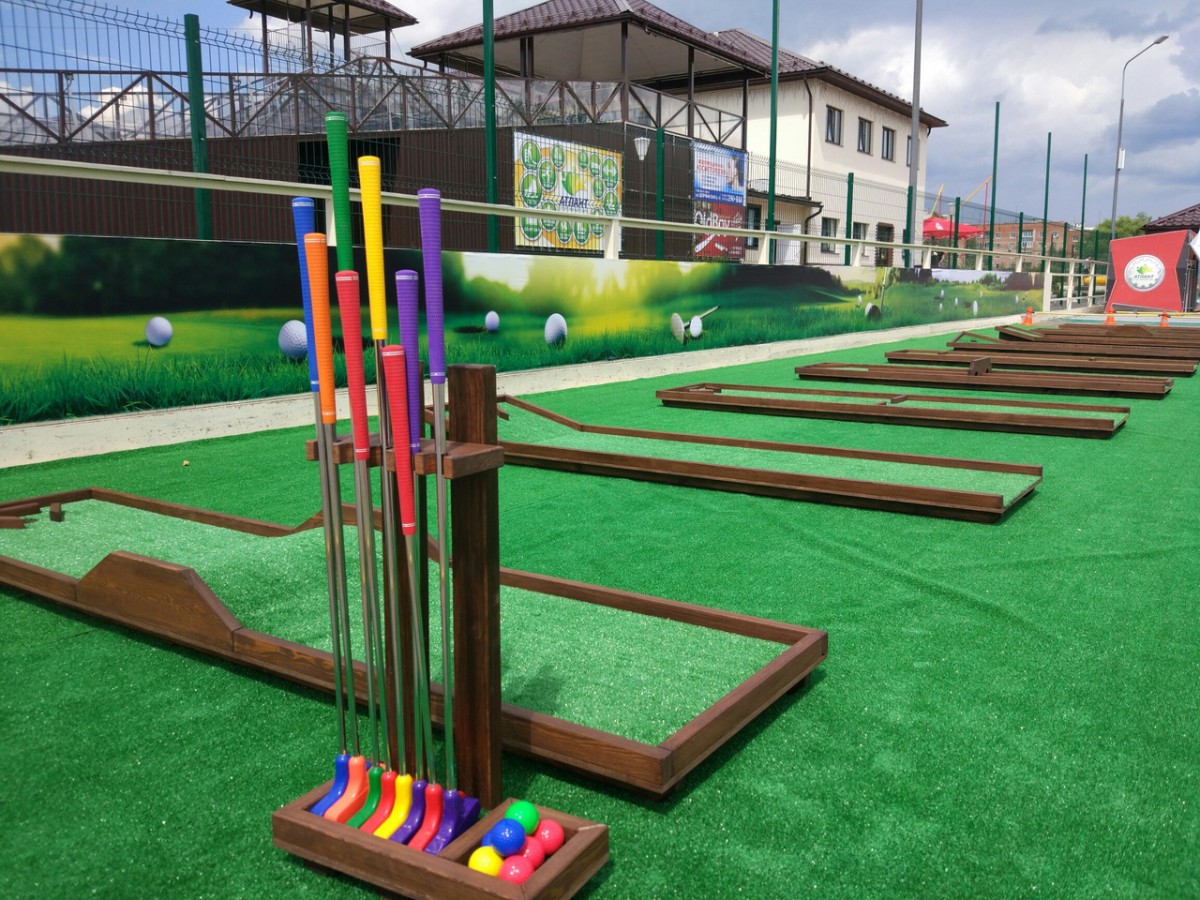 In the usual golf, players change clubs, and in minigolf – balls (the variety of which has long exceeded one thousand). Minigolf balls are made from completely different materials than regular golf balls. They also have different weights and diameters. But the main thing is that in this sport there is no off-season period.

Minigolf is an individual sports game with a club and a ball on a special field, competitions in which can be held both indoors and outdoors.

The existing variety of minigolf balls cannot be compared to golf balls. It is enough just to pay attention to their main characteristics – diameter, mass, stiffness, rebound, surface.

The diameter of the balls usually lies in the range from 37 to 43 mm, weight from 22 to 80 grams, hardness from 22 to 100, rebound from 0 to 85, the outer surface can be varnished, varnished with fine wrinkles or without coating. Such a wide variety of physical properties is due to the design features of mini-golf courses and their surface.

The practice of using a large number of balls to pass the fields predetermined their different colors to make it easier to distinguish balls with different properties from each other. Since the minigolf ball does not cover significant distances in the air, there are no depressions on its surface that reduce aerodynamic drag.

The mini-golf course does not have strict requirements for size and shape. For this sport, there are a large number of sites. For example: modular courses, fixed geometric courses, putting greens, landscaped courses, realistic mini golf, adventure mini golf courses. The World Sports Minigolf Federation (WMF) has adopted 4 main types of courses:

In general, the game of minigolf is usually played on the field, which consists of 18 playgrounds, called holes (paths). The pads are numbered, and their design is in accordance with the requirements for the field of this class.

The process of the game proceeds with the use of mini-golf clubs. The club itself must not have special devices to facilitate aiming, and the playing surface of the club head must not exceed 40 cm².